Brian McDowell spends most of his time ripping apart web sites and looking under their covers.  Search engine optimization is more then his career, it is his life.  This page is an ongoing timeline of Brian’s dedication and focus on internet marketing strategies and the technology that helps move them forward.  His love for computers began back in the early 1990′s when he had is first word processor complete with its very own 132 character dot matrix printer.  He was introduced to a world of increased efficiency and a passion for understanding how the technology worked. 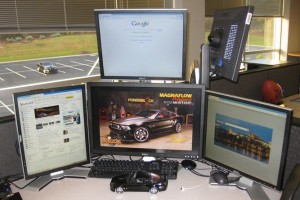 Brian McDowell was the first resource for Red Ventures in their Charlotte NC headquarters.  He took SEO from a proof of concept to one of the most successful and profitable marketing channels in the company.  Brian was single handedly responsible for a multi-million dollar revenue channel with over a 300% gain in year one.  After 5 quarters of aggressive growth, Red Ventures invested in more resources for Brian’s team including Jr level SEO’s, developers and multiple interns.  By the end of year two, Brian increased revenue by another +50% with numbers in the milti-million dollar range yet again.  He was able to close out year two with multiple self designed in-house SEO/SEM tools.  These tools were a combination of tracking, monitoring, scraping and data transformations that were unavailable anywhere else in the industry.  Under Brian’s direction, the team was able to test multiple linking strategies on stand alone sites and track their effectiveness in Google, Yahoo and MSN.  There was no such thing as a budget as long as they were learning the landscape.  Any and all kinds of tactics were used from aggressive to non-aggressive.   Similar tactics were even broken up between individual brokers, vendors and service providers.  Red Ventures has a unique business model in the fact that they provide customers to their parent companies, not just leads.  Red Ventures has their own call center, runs their own sites and assumes all of the marketing risks/costs.  From an SEO perspective the sites were managed similarly to a super affiliate.  They would dominate the long tail but never rank #1 for the brand.  While at Red Ventures, Brian McDowell also cracked the processes to get national sites to rank in the top positions for all local level geo targeted search queries.

This was a critical point in the career of Brian McDowell.  LendingTree.com and RealEstate.com at the time were rolled up under the IAC umbrella and were coming off multiple quarters of amazing gains.  The main goal was getting into a development roll for the RealEstate.com family of sites.  Since Brian did not know the proper technologies, he started in a QA roll (Software Test Engineer).  The primary responsibility was to break every application prior to going to the production environment.  There was an addiction and love for hacking the logic as well as the design.  McDowell was responsible for many high profile projects and gained a deep understanding for website architecture and release cycles.  After more then a year in QA, he landed a development roll building a universal data aggregator that was capable of pulling hundreds of real estate MLS data feeds and transform them into our in house data structure.  Not to long after that Brian was offered an amazing opportunity to work with Rob Lenderman and Paul Kennard in the SEO group.  The days were spent doing data analysis and building solutions for dominating for lending and real estate key phrases on the local and national level (some of the most competitive in the industry).

Brian rebuilt 2 different versions of CunnaneGroup.com between 2002 and 2004.  This is where he had his first real introduction to SEO and internet marketing.  During the same period he was still working through some contract work with Electronic Management Services and multiple Graphic Design / Web Design contracts.  He helped transition the archaic paper trail project management system that the Cunnane Group was using over to an online management system called BuildTopia.  IT still played a critical roll in his future aspirations.  Brian obtained his real estate license and helped with over 15 million dollars in new home construction sales.  Unfortunately, the Cunnane Group had very little to offer in the lines of IT, marketing and online media.  He decided to continue his contracting career and began looking at local real estate companies that focused on their online media presence (with a decent IT group).

Brian continued to work for Electronic Management Services while taking courses at UNCC.  He made an aggressive attempt to finish his Bachelors in Computer Science in just 2 years.  Unfortunately, only about 1/2 of the credits from ECC transfered over to UNCC.  Brian was committed to his studies and took the maximum course load though each semester including summer sessions.  Similar minds gravitate toward each other and he quickly found himself fighting in mixed martial arts while competing for top GPA rankings in his class.  Staying calm under pressure (or high adrenalin) while executing both mathematically and strategically is one of his strongest traits.  Brian graduated Cum Laude in Spring of 2002 with a Bachelors of Science in Computer Science from UNCC.

A career path took no time in Buffalo NY.  Brian took a job 3 miles from his home (15 miles each way by bike) within a week of graduating.  For 2.5 years Brian built healthcare management software in Business Basic Extension (BBx) for the Diamond 725 platform.  In Q3 1999 Brian licensed Electronic Management Services (EMS) in Charlotte, NC.  He telecommuted from a home office full time until mid 2000 when he decided to return to school and get a Bachelors degree and get more exposure to updated technologies.  From 2000 through 2005, Brian continued to put many hours a week into the company working as an independent contractor.  It was with EMS that Brian had his first introduction to HTML, Java and the power of internet marketing.  He built the first iteration of MaternaManager.com as well as an HTML / Java marketing piece that was handed out at trade conferences on 3.5″ floppies (this was in 1998).

After a failed attempt of making it on his own without an education, Brian decides to enroll at Erie Community Collegeand pursue training in either Accounting or Computer Information Systems.  Brian worked his way through his Associates degree while working 70 hours a week between two jobs.  He aced the accounting courses but there was something about COBOL, RPG2 and SQL on the AS400 that got him all excited (he aced those as well).  In December of 1997, Brian graduated with an AAS in Computer Information Systems with High honors.